skip to main | skip to sidebar

The Groom’s Cake: A Wedding Cake by Men, for Men 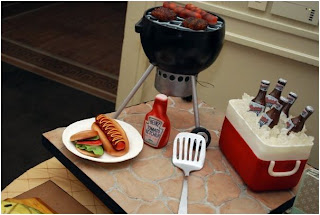 We’re going to go out on a limb here and guess that you’ve never heard of the groom's cake. Don’t feel bad, very few grooms have actually heard of this phantom cake, and fewer still have had the pleasure of enjoying one at their wedding.

The groom’s cake was created as a means of honoring the all-too often second place winner in the wedding ceremony, the groom. While it isn’t commonplace at traditional weddings nowadays, the groom’s cake makes an appearance at most wedding celebrations in the south. Leave it to the ever-cordial southerners to have invented a ritual that provides all parties of a wedding with a bit ‘o’ hospitality and good love.

So what the heck is the groom’s cake? Simply put, it’s a cake for men. Nothing manlier than a cake, that’s for sure. This is the groom’s chance to have a cake just for him (and his groomsmen) that honors his role in the wedding—as most standards wedding cakes are picked by the bride and with the bride’s personal favorite flavors in mind. Forget white roses and vanilla, forget pink sateen custards, and forget lace made out of edible pixie dust. The groom’s cake is made with the flavors the grooms and his men prefer, and in the shape and style they prefer.
Groom's cakes are often shaped into sports themes, such as football fields or soccer balls. Their flavors are often simple and bold: chocolate. The cakes are often served during the rehearsal dinner or at the wedding reception itself, alongside the traditional layered wedding cake. His and hers.

There are few times during the course of a wedding that the groom has a chance to get his—and only his--say on any decisive logistics, so the groom’s cake is your chance to speak up. Now you can have your wedding cake, and eat it too.

Here’s the most radical groom's cake we’ve come across yet: the entire food spread is composed entirely of cake. Now that’s manly.

Written by Kim Stakal
Posted by Jon at 11:27 AM